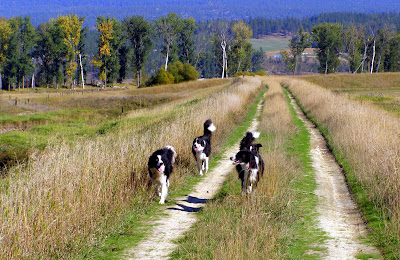 Have I ever said how much I love land conservancies?
Well, I do, and I really appreciate the Nature Conservancy's beautiful Ball Creek Ranch up north along the west side of the Kootenai Valley.
Our entire family loves this place as we do the Kootenai Wildlife Refuge.
I chose to go to the Ball Creek Ranch yesterday because the Refuge requires that dogs be on a leash.
Somehow I didn't think I could master holding on to four Border Collies at once.
They've got energy, to say the least.
I made a late-morning decision to go north after the wind just kept blowing----not always a good situation for saddling up and going for a nice horseback ride.
Yesterday's afternoon with the Love pups was just as fun though.
We loaded up in the car. Brooke took shotgun while the other three snuggled up like sardines in the back seat.
Border Collies are better than kids when it comes to finding a place to be comfortable in a car.
Very little complaining; they just make it work.
The only competition comes when they jump in and one takes the lead in getting to ride shotgun.
When you're a Border Collie and you ride shotgun, you get to do a lot of licking.
And, when you're the driver, you get to deal with a lot of slobber.
Before heading to the Conservancy and not having any particular schedule, I turned off at the road leading to Paradise Valley, south of Bonners Ferry.
I've spoken for two tons of premium hay from Jim and Debbie Dahlberg, so I wanted to see where they lived.
Those photos Debbie has posted on Facebook have shown a beautiful setting, and their farm at the base of Black Mountain is for sure.
I'd never really met either of them, although we know a lot of folks in common.
Debbie walked up to the car, got some slobber from Brooke and said, "Go ahead and let your buddies out."
I couldn't believe that someone would offer a perfect stranger and four unknown Border Collies free rein of her place, but Debbie did.
The dogs got acquainted with her young Corgi and spent the rest of the time playing, including in the water trough aka swimming pool Debbie has set up next to her house for doggie paddling and splashing.
After looking at Debbie's horses and making some preliminary plans to go trail riding with her in her beautiful surroundings, the dogs and I headed for Bonners Ferry and straight up the north hill toward the Mennonite Bakery.

I haven't had a Mennonite Bakery fix for a couple of months, so the stop was an essential for this trip.  I also talked with the owner of Sharon's Country Gifts next door.  She said she'd stock my books on her shelves.
She also told me a similar store is making a start-up (slowly) in Sandpoint.
Miller's Market will be located at Handyman Services on North Division.  Sharon says it will open soon, offering deli sandwiches, prepared by Mennonites.
So, locals, you might have heard it here first.
After loading up on loaves of honey wheat and rye bread, cinnamon rolls and half a dozen fresh-baked macadamia-nut cookies with white chocolate chips, we moved on toward the Conservancy.
Once there and soon after starting down the lane leading to the dike, I wondered if this could possibly be velcro season.  I did not have to wonder long.
Racing through the grass down to creek beds and later down to the Kootenai River, the doggies were covered with those sticky little buds which get really sticky this time of year.
Soon my jacket hanging off my waist was covered.  I knew there was work ahead but nothing could be done about it then.  Might as well enjoy the walk.  The dogs enjoyed running, leaping, swimming and lots of licking as they made their numerous trips back to see that I was doing okay.
A grass field was burning to the south; even the smoke plume was beautiful on this gorgeous afternoon.
I pinched a lot yesterday----getting rid of those velcro buds, but I also pinched myself, feeling so lucky to be out there in all that beauty with those playful pups.
Definitely a good way to spend an autumn afternoon.
The only flaw came later when I stopped by Bill's office at the Bonners Ferry Idaho Department of Lands where he works on Tuesdays and Thursdays.
During my visit with Tammy and Bill inside, Kea, who had grabbed shotgun on the return trip, took advantage of a situation very near her nose.  I had forgotten about the baked goods in a sack on the floor.
While leaving the office, I asked Bill if he wanted a Mennonite cookie for his trip home.  He declined.
Lucky for him.  The bag of cookies (five left) was devoured, every last crumb.
I've heard the warning about dogs and chocolate.  I hoped white chocolate was not so potent.  Apparently, five Mennonite cookies with all those chips does not do a dog in, cuz Kea's doing just fine this morning.
Except for that incident, it was a great dog-day afternoon.