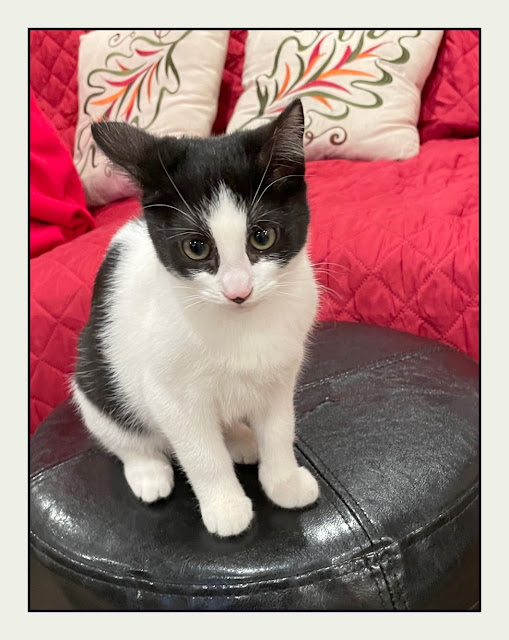 This little lady did some jail time last night.
Pepper thinks she rules the Young Love house. Nonetheless, there's a limit when a kitty keeps returning to the kitchen to check out all the items on the leftover buffet table.
After several trips to the kitchen by humans to retrieve Pepper, she got zipped into the klink, which is basically her little kitty carrier.
Pepper was not a happy prisoner, but the rest of the ZAG-watching party didn't mind watching her kitty clawing-at-the-door protest from inside the carrier.
Try as she might, her jail was zipped tight.
Occasionally, after what seemed like ample "time-out's," she soon resumed her trips to the kitchen, only to go directly back to jail.
Yup, the pet party at leftover night with big dogs, little dog and smarty-pants Pepper helped alleviate some of the stress being endured by all humans watching an intense Gonzaga-Duke basketball game.
While Pepper spent time in jail, doggies wandered around the house, some finding toys for tugging and toys to chew upon.
Most of the evening, wise old Todd preferred to stay outside he's not into puppy play.
Little Miss Bridie attended her first social gathering last night at the Young Love's house and passed the behavior test.
At first, she spent a lot of time watching all these new friends do their thing in their home environment, always making sure of the presence of an adult pair of legs nearby.  Those human legs seem to offer a sense of security for pups Bridie's age.
The resident beloveds in Colburn spent their fair of time sizing up Bridie, sniffing and staring and strolling behind her every step as she conducted her own survey of the living room and kitchen and occasionally the bedroom.
Eventually, deciding that everything was okay, each four-legged resumed their usual in-home behavior.  As for Bridie, she feigned playing with the older dogs and loved the chew toys, which were either offered and discovered in this new environment.
While all this was happening, humans ate leftover, and humans sat mostly rigid, as it was obvious the ZAGS were in for the game of their lives.
Twas a tough match, but both teams displayed their array of talents in the contest where both teams led at times. Inthe end, Duke won the game by three points.
By buzzer time, Bridie had fallen into a deep puppy slumber, the first one all day for her.
Happily, she responded to the leash, pulling herself from the floor, walking a few steps, then plopping with a distinctive, "puppy hits the floor" rumble.
This scene was repeated two or three times before we reached the door and walked out into the night toward the car.
I do think Bridie slept well last night, and today she's ready for more visiting.  Later this morning, she'll get to meet former exchange student Emma from Germany who's in Sandpoint with her friend Brandon for Thanksgiving.
Should be a fun visit.
Has it still been less than a week since we first met Bridie at that Starbuck's in Ellensburg?  How can that be?
That introduction seems so long ago because she continues to adjust to her new life so quickly that it seems like she's been here forever.
Meanwhile, when dogs and cats aren't entertaining us, the squirrel family takes over.
Happy Saturday. 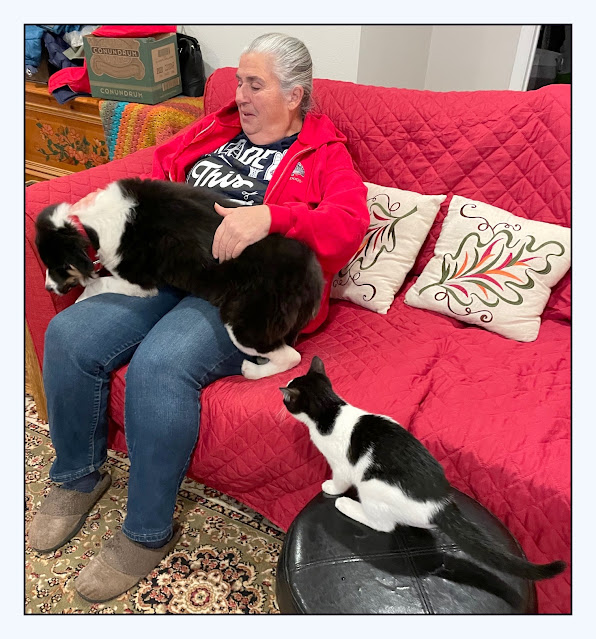 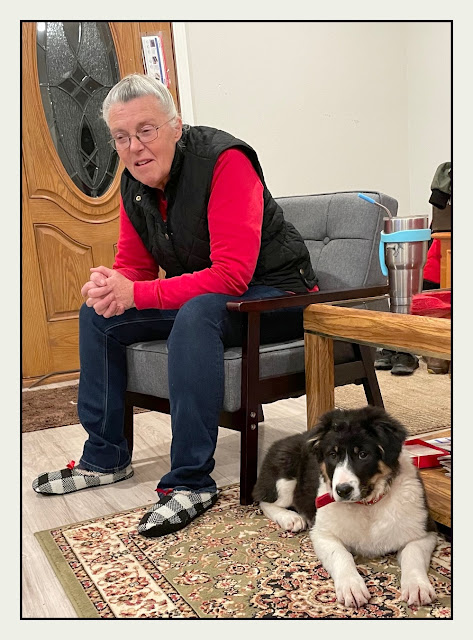 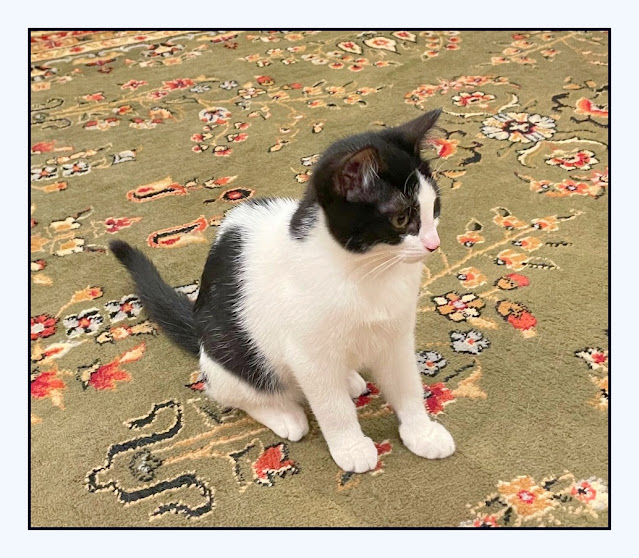 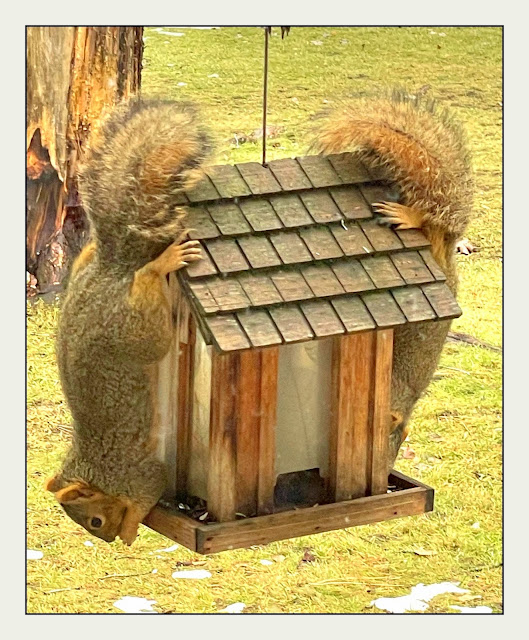 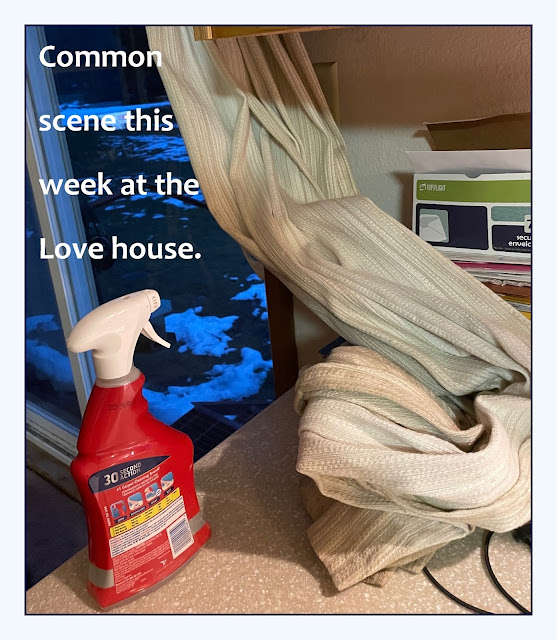 Life is good with animals that make us smile and make us love. 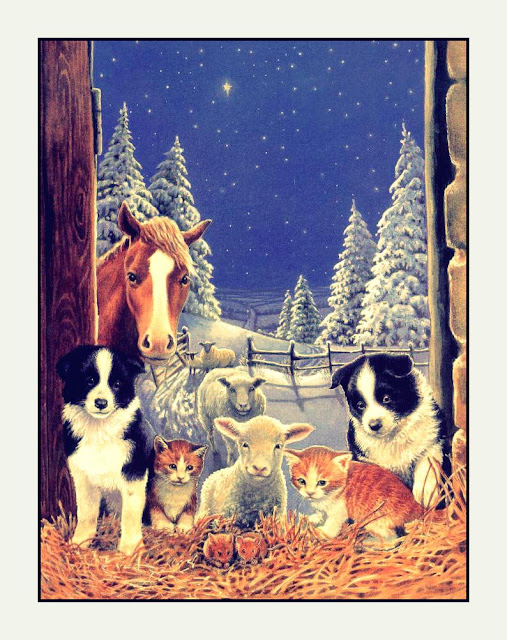