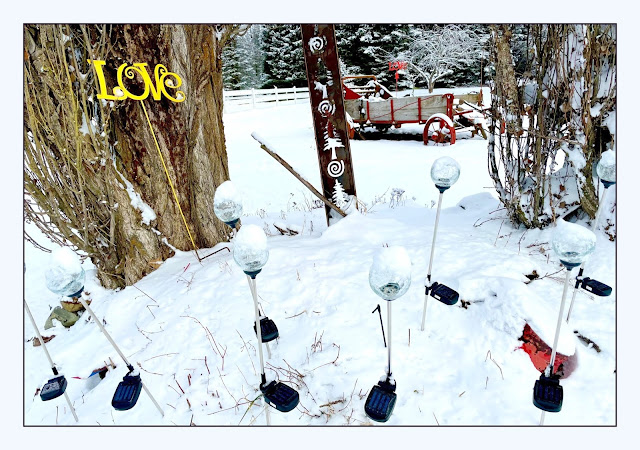 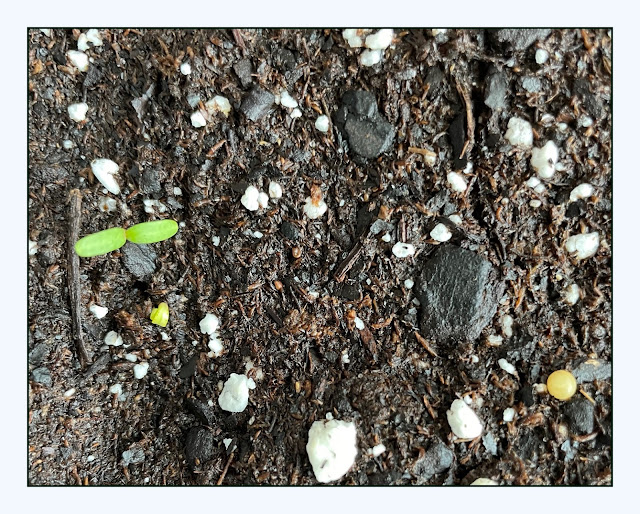 I told Bill yesterday morning, after doing my first set of chores that if we had winters like this one every year, I wouldn't complain.

For a change---so far---it has not been a winter of excess like we tend to have so often.

We've had snow storms, but in almost every case, they've been moderate.  We've had cold weather, but it's been short-lived. We've had rain, but it doesn't go on for day after day.  We've had a really nice helping of sunshine.

Overnight on Thursday, we had snowfall, and in the morning the entire landscape was so stunningly beautiful with the new coat of maybe four inches.

Twas the kind of day where everyone could enjoy walking without slipping and walking with relative ease over the new snow and taking in some scenes of exquisite winter art.

Later in the morning, I summoned Bill over to the garden flats to note the rising of two marigolds from the potting soil.

First baby plants of 2021, and this year it's no less thrilling than any other year to witness the effect of planting seeds.

This morning I spotted what may be a baby geranium in that same flat.

I'm hoping to add to the sowing and growing over the next few days.

There's nothing like the annual thrill and hope involved with gardening---always the ups and downs and frustrations but almost always overall satisfaction. 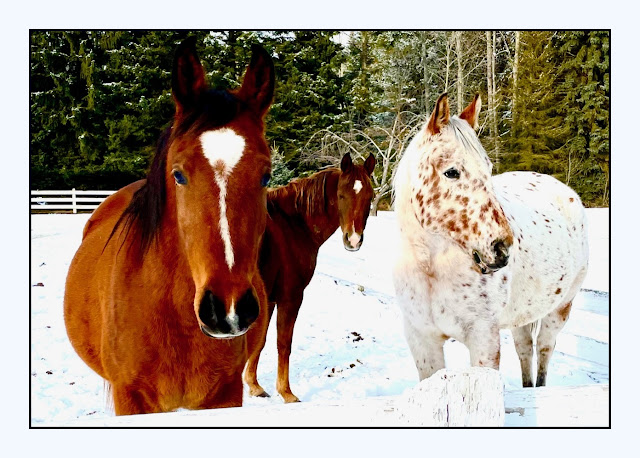 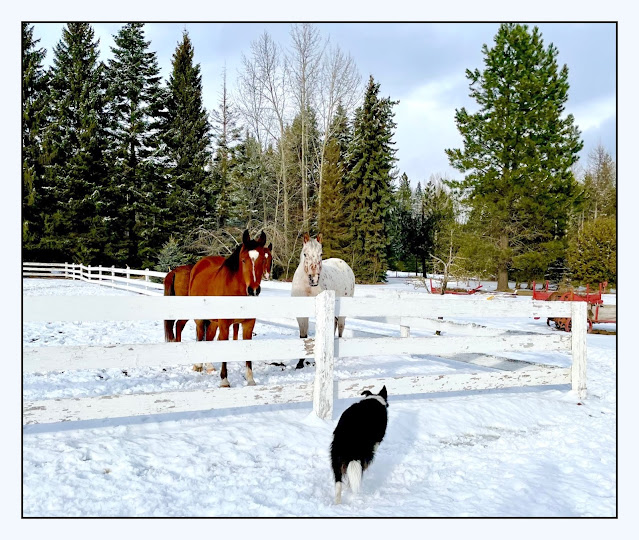 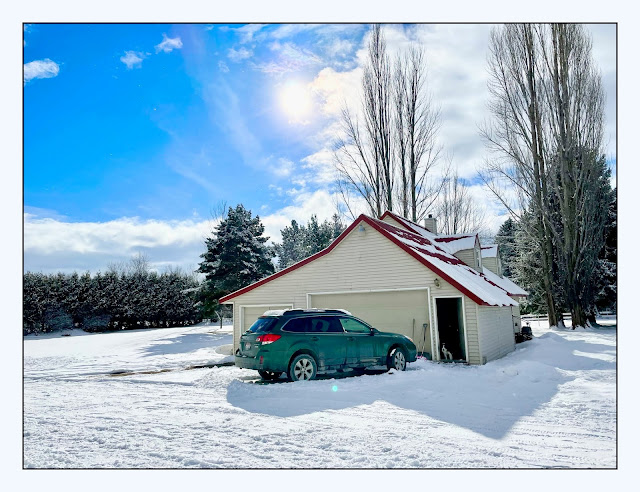 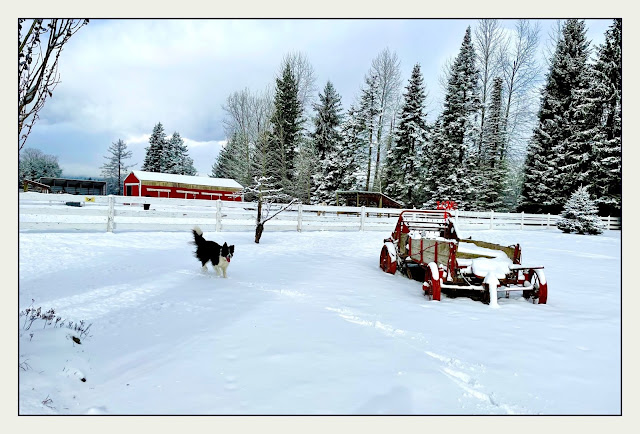 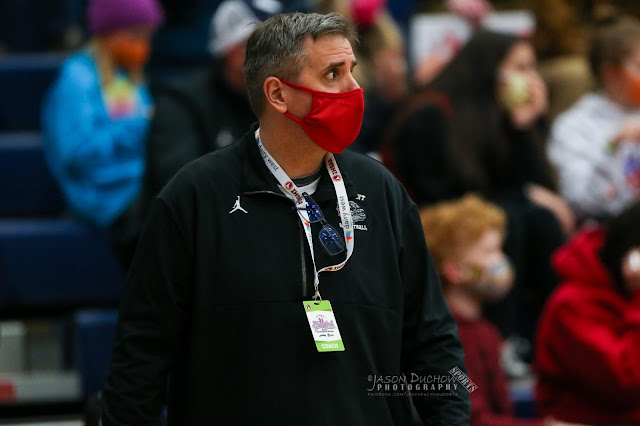 Sandpoint Girls Varsity Coach Will Love watches his team compete against high school girls powerhouse Century during yesterday's Idaho State Tournament.
--Jason Duchow Photography
I already told Willie yesterday afternoon that we are always proud of him, especially for the positive influence he brings to the lives of young people as a teacher, coach and good human being.
I hear it all the time:  oh, Mr. Love, he's my favorite.
Now, that's a perennial win!
Bill and I knew Willie and his team were disappointed with the State Tournament loss against Century, but we were also pleased with how well the Bulldogs stayed in the game against a perennially tough team.
It's been an amazing season for the Sandpoint girls, as they and their coach have soldiered onward, never let adversity stand in the way of reaching their goals.
Overcoming adversity and being proud of what is achieved in spite of it can be downright satisfying.
As always, there's so much more to a story with any pursuit than the final score.  This year's story for the Sandpoint Girls Varsity team has been an admirable one.
We're hoping the Bulldogs can attain that final goal today when they play Burley at 11 a.m. PST.
A win means a trophy, and that's exactly what they'd like to bring home to Sandpoint on an uneventful bus trip.
GO, BULLDOGS!!!
And, of course, today we're thrilled with another basketball doubleheader here at the Lovestead
We'll listen to the SHS Bulldogs game on Radio Station KSPT-1400 AM at 11 and then await another ZAGS game at 5 p.m. PST.
This time the No. 1 Gonzaga Bulldogs host San Diego's Toreros in the Kennel.
This game will be broadcast on ESPN2.
Great day for basketball fans.
GO, ZAGS!!!
Happy Saturday!!! Annie sent this remake of "Biko" last night. I thought it was kind of neat.

Peter Gabriel has re-recorded his 1980 protest classic “Biko” with help from 25 musicians from around the globe, including Beninese vocalist and activist Angélique Kidjo, Yo-Yo Ma, the Cape Town Ensemble, Sebastian Robertson, and bassist Meshell Ndegeocello.

The video was produced by Sebastian Robertson and Mark Johnson as part of Playing for Change’s Song Around the World initiative.

The original song was written as a tribute to South African anti-apartheid activist Steve Biko, who was murdered in police custody in 1977, but Gabriel tells Rolling Stone that it still holds incredible meaning today.

“Although the white minority government has gone in South Africa, the racism around the world that apartheid represented has not ,” he says. “Racism and nationalism are sadly on the rise.

In India, Myanmar and Turkey, Israel and China, racism is being deliberately exploited for political gain.”

“On the black/white front the Black Lives Matter movement has made it very clear how far we still have to go before we can hope to say we have escaped the dark shadow of racism,” he adds.